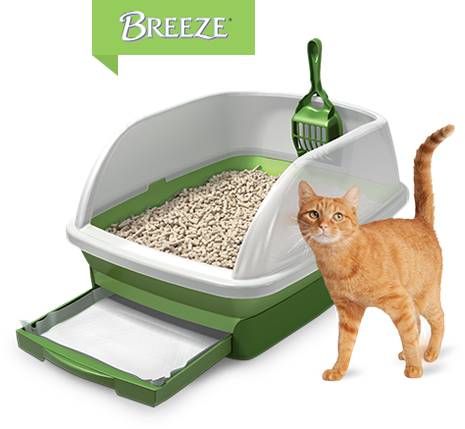 Most litter boxes use clumping, bentonite-clay based litter. Non-clumping clay litter used to be the norm, but it fell out of favor several years ago when clumping litter took over as the standard. Since that time, most cat owners have grown accustomed to scooping out large clumps of cat poop and pee whenever they’re doing litter box maintenance. This certainly beats the full litter removal that was required during the pre-clumping era, but it’s still a pain.

One of the biggest frustrations of clumping litter is the volume of litter that gets consumed by cat urine. A little bit of litter sticks to your cat’s solid wastes, but urine ends up creating big clumps of litter that must be removed and, ultimately, replaced. You end up throwing away a pretty significant quantity of litter with every scoop.

Wouldn’t it be great if there was a litter box with litter that didn’t get totally consumed by the moisture in your cat’s poop and pee, and that also controls odor? Well, you’re in luck, because there is! Say hello to the Purina Tidy Cats Breeze Litter Box System!

The Purina Tidy Cats Breeze Litter Box System is brought to us by Purina Tidy Cats, a cat products behemoth. The Tidy Cat brand can originally be traced back to Ed Lowe, a man who single-handedly changed the pet product world when he “invented” cat litter in the late 1940’s.

Before Ed, most people either let their cat go to the bathroom outside or used ashes, dirt, sand or other generic materials as a rudimentary form of cat litter. Ed began using clay minerals to create a bed for his cat to go to the bathroom on, mostly because of the material’s high absorptive capacity. The rest is history. Ed named his product “Tidy Cat” cat box filler in 1968. After Ed died, the Purina corporation bought up the Tidy Cat brand, which is where it resides today.

We’ve looked at variety of types of litter boxes, but this is the first litter box “system” we’ve evaluated. The Purina Tidy Cats Breeze Litter Box System is made up of the following components: 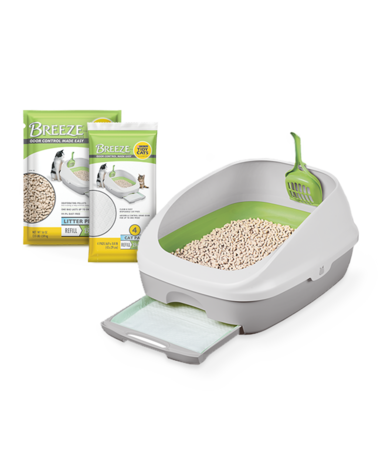 The special dehydrating pellets are placed into a Grated Tray that sits above the litter box Base. The litter pellets dehydrate solid waste, preparing it for removal via scooping. However, the litter is not designed to clump together when exposed to cat urine. Instead, urine is allowed to filter through the litter and out of the Grated Tray into the litter box Base. Some of the moisture from the urine is absorbed by the pellets as it passes through, but not very much. Once the urine enters the Base, it is absorbed by a replaceable absorbent pad.

Replaceable absorbent pads are installed using a plastic tray that slides underneath the litter chamber. For a single-cat household, the pads are able to provide moisture and odor absorption for up to seven days. Once the pads are no longer absorbing odor or moisture, they can be removed and replaced. You may need to replace the pads more frequently if you have multiple cats using the Breeze System litter box.

The Breeze System has a fairly high sidewall that curves inwards at the top. This wall helps prevent litter from being kicked out by your cat while she is using the litter box.

The shape of the Breeze System litter box is sleek and attractive. It is only available in one color option (green). This is great news if green is your favorite color, but if it’s not, you’re just going to have to deal with it.

Two types of Breeze System litter box are available: hooded and open. Since we don’t like hooded litter boxes at all, we highly recommend going with the open system in lieu of the hooded option. This will allow your cat to feel a bit more comfortable while he’s doing his business.

The biggest downside of the Breeze System litter box is its size. Many users have pointed out that the litter box is too small for larger adult cats. If you have a large cat, you may want to consider going with a larger litter box. Hopefully Tidy Cats will develop a large version of this litter box in the future.

The litter pellets are 99.9% dust free, and they are fairly large, preventing them from sticking to your cat’s paws and tracking all around your house. The pellets are able to withstand up to a month of continuous usage in a single-cat household, meaning that you’ll replace the litter far less frequently than a normal litter box.

The biggest benefit of the Breeze System is that your litter is not consumed by absorbing urine and forming large urine clumps. While bentonite clay litters effectively clump urine into solid masses that can be scooped and removed, the Breeze System allows the litter to remove moisture only from solid waste. As a result, the litter lasts much longer in the Breeze System than in a traditional litter box.

Replacing the absorbent pads is easy. You simply pull out the drawer on the litter box Base, pull the pad out, discard, replace, and push the tray back into the Base. 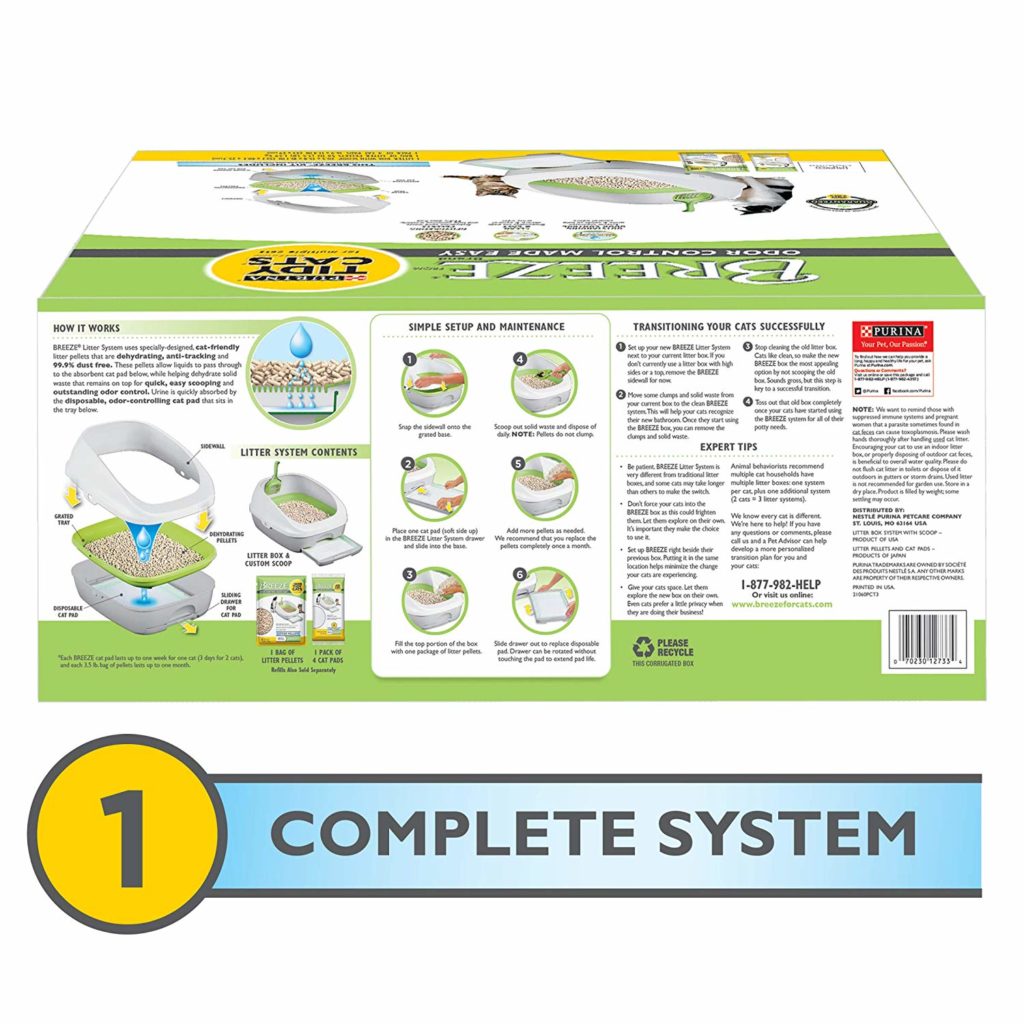 The Breeze System is made out of durable plastic. It’s the same type of plastic that most other litter boxes are constructed out of, so there’s nothing too special about it. It’s able to withstand all of the normal wear and tear from normal cat usage without breaking.

As of November 2018, a Breeze System starter kit costs just under $33 on Amazon. The starter kit includes the following:

Replacement of the absorbent pads and special dehydrating litter pellets are the biggest downsides of the Breeze System in terms of value. However, there’s no such thing as a free lunch. No matter what type of litter box system you choose for your cat, you are going to have some recurring costs associated with it. The litter pellets last much longer than traditional clumping litter since they do not have to bear the brunt of absorbing all of your cat’s urine. If you’re feeling frugal, you can also go with some non-name brand absorbent pads that Amazon sells directly:

Reviews of the Amazon pads are mostly positive, and they will save you a good amount of money if used in place of the Tidy Cats version.

The Purina Tidy Cats Breeze Litter Box System earns an 8.0 / 10.0. This is a solid litter box that can save you a bit of consternation associated with scooping clumps of cat urine. The replacement dehydrating pellets and urine-absorbing pads are a little expensive, but the cost of replacing them ends up being fairly close to the cost of replacing clumping litter constantly, especially if you go with the generic replacement pads. This may not be the best litter box for large cats, but it certainly works great for kittens and medium sized cats. Check it out on Amazon! 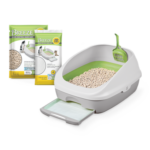