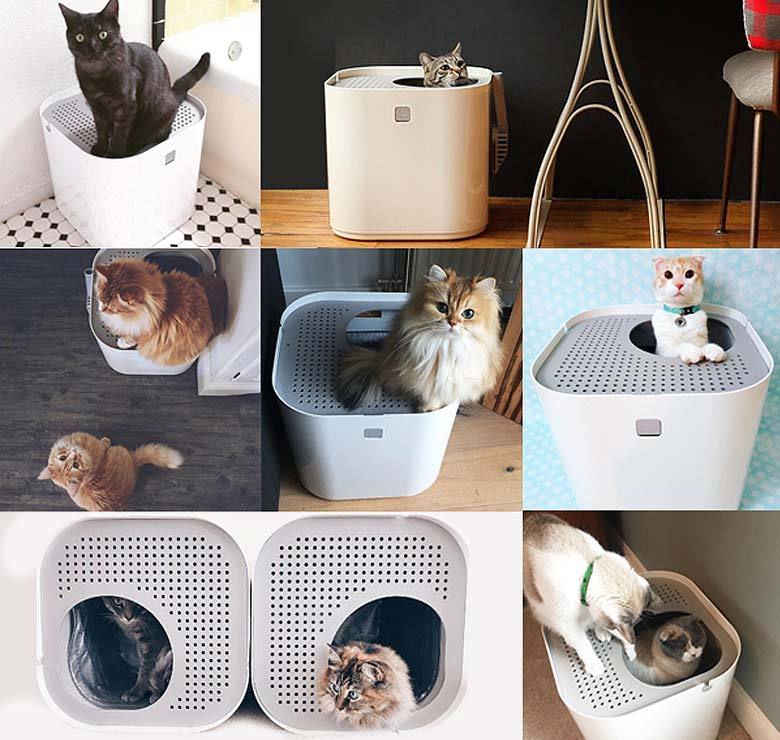 We all want the best for our cat. That goes for their litter box too, even if it is just a big cat toilet. Of course, we want a litter box that our cat likes, that reduces odor, and that’s easy to clean. But we ideally would also like one that looks good too.

If the aesthetics of your litter box are important to you, then wouldn’t you be interested in a litter box that the New York Times once referred to as, “the iPod of litter boxes?” Keep reading to find out more!

Of course, as we saw in the case of the IRIS litter box, use of a top entry in lieu of a side entry can help curb a lot of the issues associated with a covered litter box. The litter box we’re going to be taking a look at today is in also a top-entry, and it’s a pretty big deal in the litter box world: The Modkat Top Entry Litter Box.

The Modkat Top Entry Litter Box is offered by Modkat, a niche company that only sells litter boxes and their associated accessories. Modkat also offers three other types of litter box in addition to the Top Entry model. Their entire line also includes the following models:

The box contains a perforated plastic roof. Whenever your cat exits, she may walk on the roof of the box. Litter tracking is minimized by the perforated surface, and bits of litter that fall off of your cat’s paws are allowed to fall back into the box through the perforations.

Check out the video below to see the Modkat Top Entry Litter Box in action (don’t worry, not TOO in action. You’ll just see some cats going in and out of the box, plus some people dancing):

The Modkat Top Entry Litter Box is constructed of strong, durable plastic, and the base of the box is seamless. This prevents it from leaking in the event that the reusable liner begins to wear out with time. One other benefit of the litter box is that it can be purchased in three different colors: white, black, or gray. Modkat used to carry a bunch of other fun colors, including red, blue, and orange, but they have since eliminated these lines.

Since your cat can only enter the litter box by climbing on top of it, this box may not be suitable for very young kittens or elderly cats with limited mobility. However, this box works great for the vast majority of cats.

The manufacturer of the Modkat Top Entry Litter Box recommends that the box works best for cats 12 pounds and under. Larger cats may damage the internal liner or simply not have as much space to move around while going to the bathroom. However, the lid can support up to 30 lbs of weight.

When it comes to cleaning, the Modkat Top Entry Litter Box has a few advantages over other types of litter boxes. The lid connects directly to the body of the box, but it swivels, providing easy access for scooping. Swiveling the lid causes any litter that is collected on the surface to fall back into the box. Once you finish cleaning the box, the lid locks back into place.

The simple box shape makes it easy to scoop and prevents collection of cat urine and feces in nooks and crannies. The liner should prevent litter from collecting in the box directly. Be on the lookout in case your cat is scratching at the liner aggressively to bury her waste. The liner is strong, but some users have reported tears caused by aggressive waste burying.

Changing out the entire litter supply is also easier than most boxes. The reusable liner detaches from the box, allowing you to lift it out of the box and pour out used litter into a garbage can. This is much easier than picking up the entire litter box and trying to dump it out. You can also clean the liner during litter change outs using soap and water. Make sure to dry the cleaned liner completely before placing it back into the box.

Make sure to replace the replaceable liner periodically. The liner is typically good for about three months, but the lifespan may vary depending on how many cats use the box. Replacing the liner will help control odor and will ensure that your cat has a fresh space to do her business. 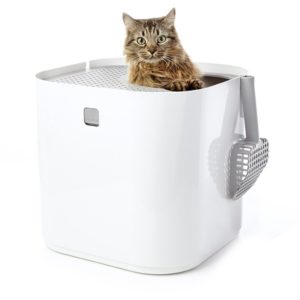 The reusable liner that holds the litter helps extend the lifespan of the plastic box. It also prevents odors from feces and urine from seeping into the plastic and gradually impregnating it with odors over time. Keeping the box liner Although the reusable liner is a bit annoying since you have to replace it approximately once every three months, it also extends the lifespan of the Modkat Top Entry Litter Box significantly.

The Modkat Top Entry Litter Box is one of the more expensive conventional litter boxes on the market. One of the things you’re paying for when purchasing a Modkat litter box is its style and overall aesthetic. Modkat litter boxes tend to look much sleeker and more modern than most litter boxes. There aren’t a lot of options when it comes to cool-looking litter boxes, so the Modkat may be your best bet.

As of November 2018, the Modkat Top Entry Litter Box costs just under $70. It’s a bit more expensive that the IRIS Top Entry Litter Box, but it also looks a little bit cooler. It also comes with a free litter scoop. Even though those are only about $3, it’s nice to get things for free.

Aside from purchasing litter from time to time, you will need to purchase new replacement liners every few months. Replacement liners come in packs of three, and a pack of three costs about $32. That equates to a little over $10 per liner, or $10 every three months. 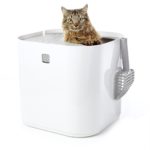